Types of festivals in Kandy Perahera

The Festival of the Tooth, often referred to as the Kandy Esala Perahera, is a festival that takes place in Kandy, Sri Lanka, in July and August. Each year, this ancient procession is undertaken to honor the Buddha's Sacred Tooth Relic, which is kept at the Sri Dalada Maligawa in Kandy. Thetypes of festivals features distinctively Sri Lankan dances, including fire dances and performers in whip-dance attire. The Diya-kepeema rite, a water cutting ceremony done at the Mahaweli River in Getambe, Kandy, traditionally marks the end of the celebration.

Below mentioned are the Types of festivals in Kandy Perahera.

The Whip crackers signify that the Perahera is very close by. The whip crackers are in the forefront of the Kandy Perahera. 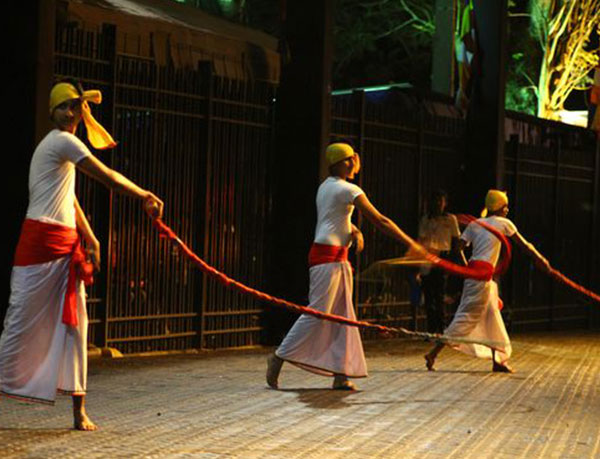 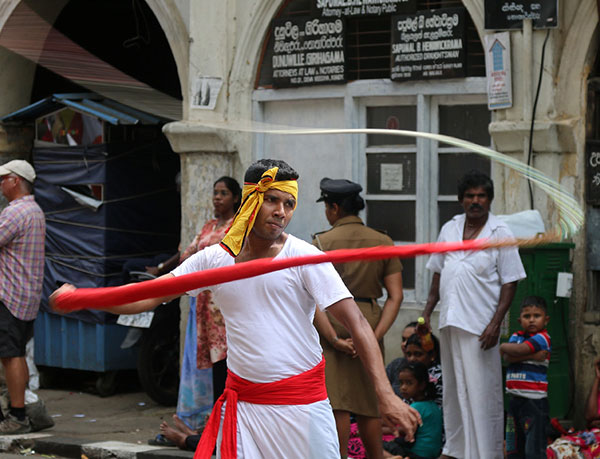 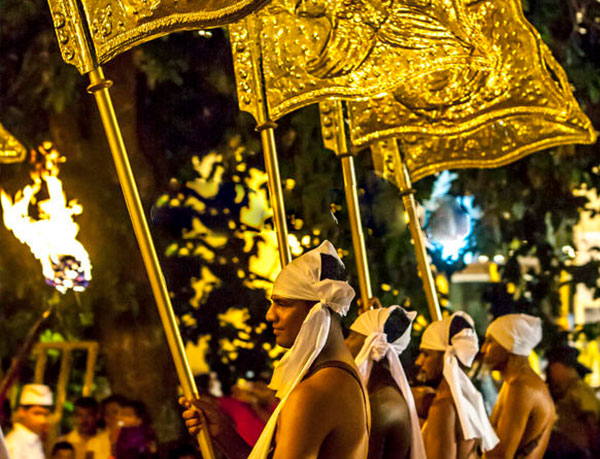 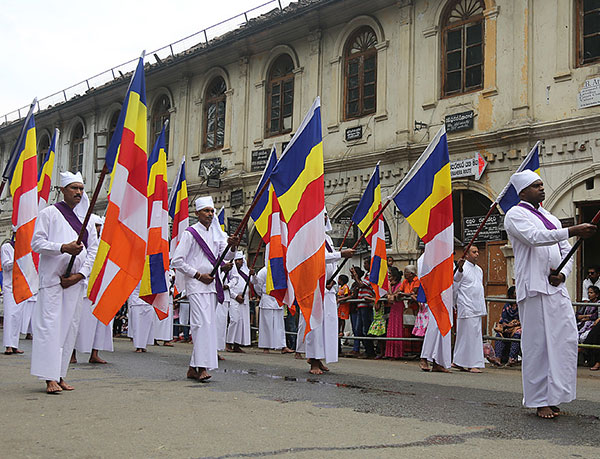 Next in Line is the fireball dancers, they play with balls of fire. The fire ball dancing team perform amazing dance moves with acrobatic movements. They are known in Sinhala as “Pandampaliya” it symbolize the glow of lighting. This is a wonderfully entertaining dance item, which displays an awesome rhythm and movements. 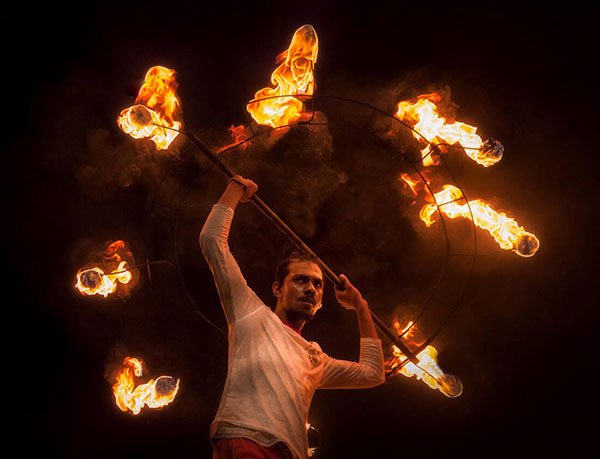 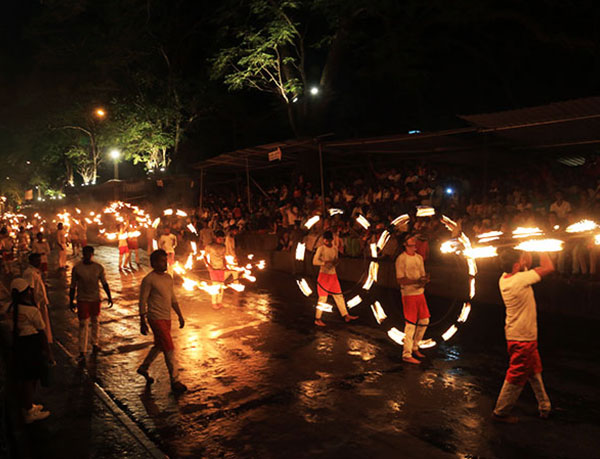 The drummers playing traditional drums and flutes come next in the parade. It is a religious ceremony carried out to honor the relic of the sacred tooth. Hereditary drummers from multiple generations are participating in this parade. To venerate the hallowed tooth relic, they play the songs with utmost reverence and respect. 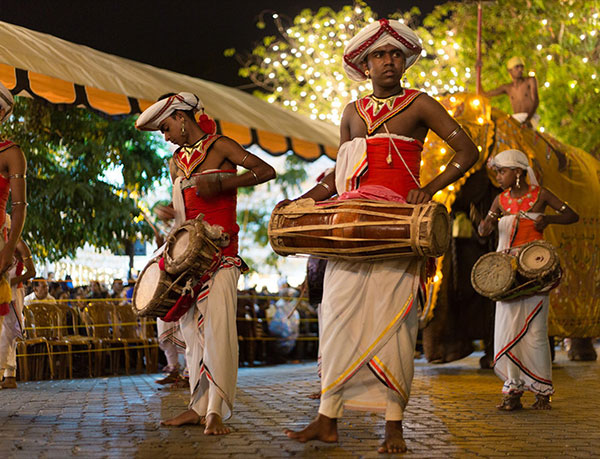 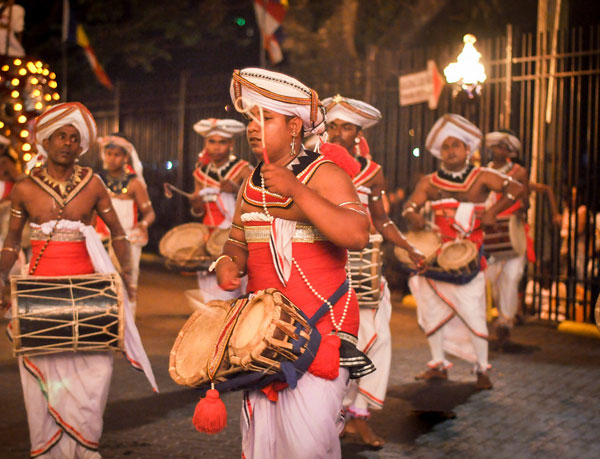 Throughout the parade, trumpeters play the classic Gajaga Wannama melody. Sri Lankans love this song since it is the Dalada Perahera tune. 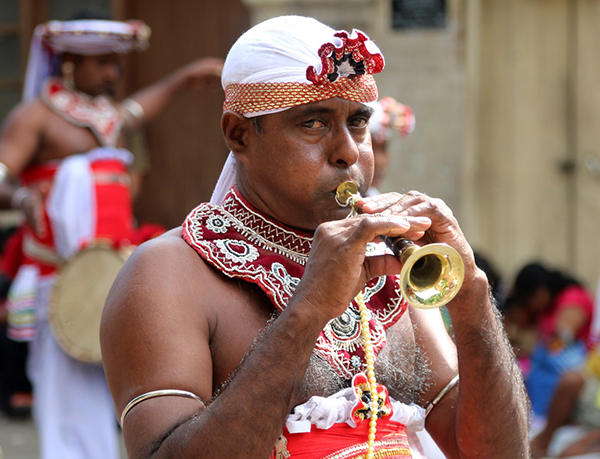 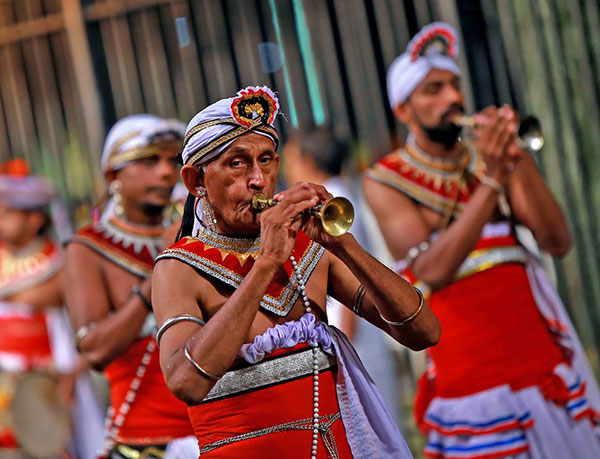 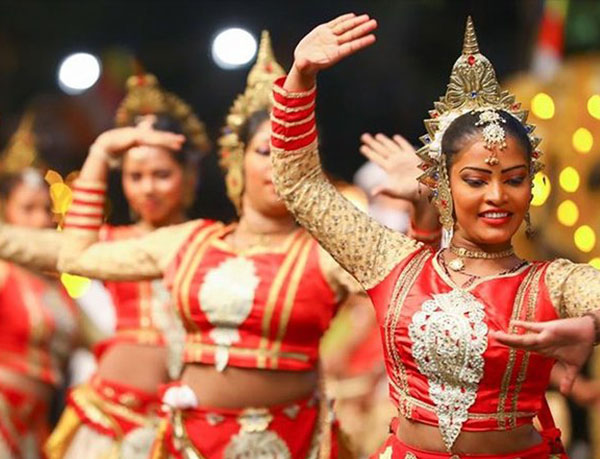 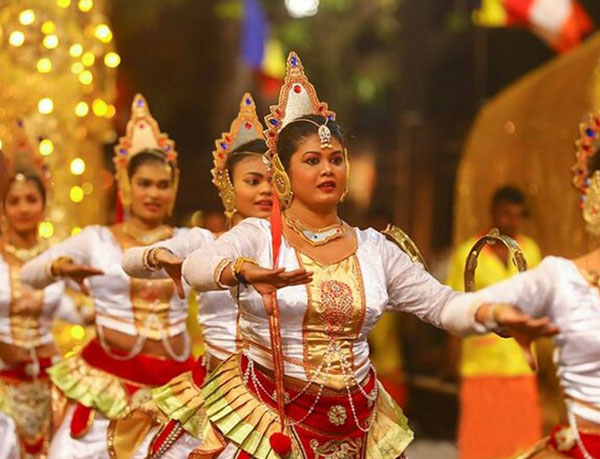 The Kandyan tradition is represented through the native dance known as "Kandyan dance." In Sri Lanka, only male dancers execute it. Their leaps and movements are amazing and magnificent, and they have the power to mesmerize the audience. The acrobatic moves of the dancing teams of traditional Kandyan dancers work their charm. One of the pageant's most impressive performances features strong leaps and whirls. To the beat of the drums, a sizable group of traditional Kandyan dancers perform. The ornate costumes worn by Kandyan dancers are bright and decorated with jingling anklets, rattling bangles, and quirky headgear. They have a great deal of talent and Perahera festival participation experience. 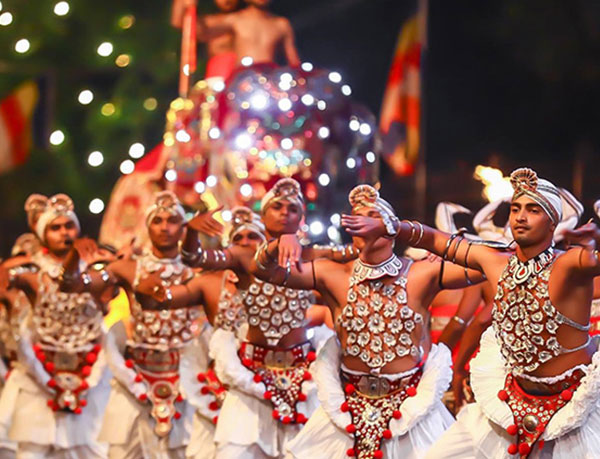 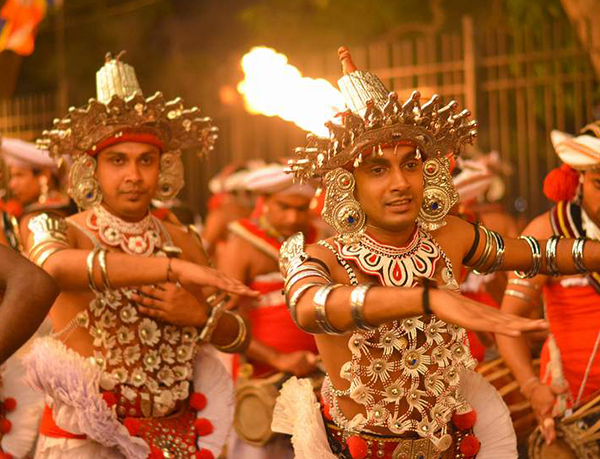 The lavishly decorated elephants are one of the most eye soothing sight in Kandy Perahera. The elephants are adorned with highly decorated garments that are illuminated with lights. The Nilames and Peramune Rala who are officials related to Temple of the Tooth rides these elephants. 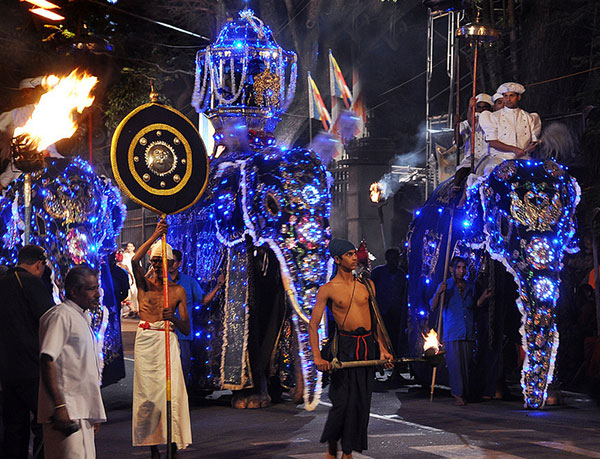 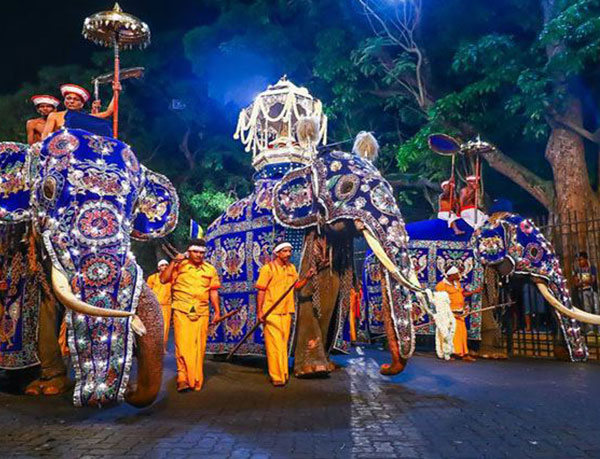 Ceremonial Tusker is the most awaited part of the Kandy Perahera procession. The arrival of the majestic ceremonial tusker with the golden casket that contain tooth relic of Lord Buddha on the top of his back decorated with lavish garments will surely give you Goosebumps. He is surrounded by two more exquisitely decorated tuskers and is dressed in an attractive gown that is delicately lighted. The main event is the coming of the tusker, the Maligawa Tusker, who carries the exquisite golden casket with tremendous dignity and great pride. The sacred Buddha Tooth Relic, known as the "Karaduwa," is kept in a golden coffin that is covered by a canopy. The majestic tusker walks on a white fabric known as Pawada that has been placed over the walking path. For Buddhists, viewing the Lord Buddha's sacred tooth relic in its gilded casket perched on the magnificent tusker is the most impressive sight. 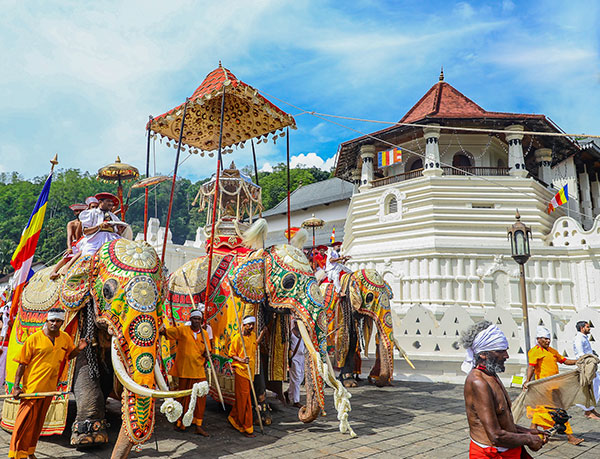 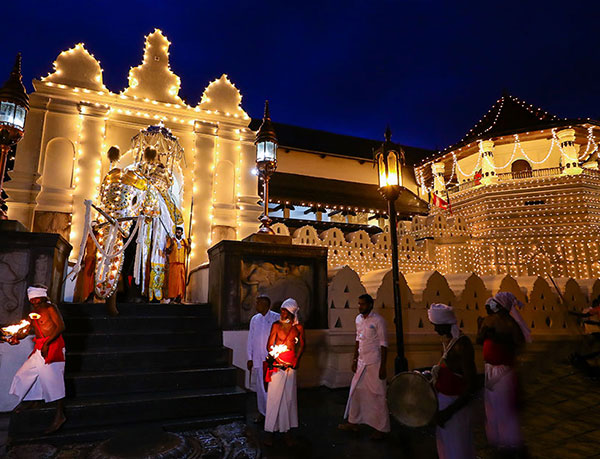 Soon after the Tusker with the golden casket comes the two long lines of traditional Kandyan dancers. This create a vibrant dancing scene while laying the path for the Diyawadana Nilame who is the custodian of the Temple of the Tooth. 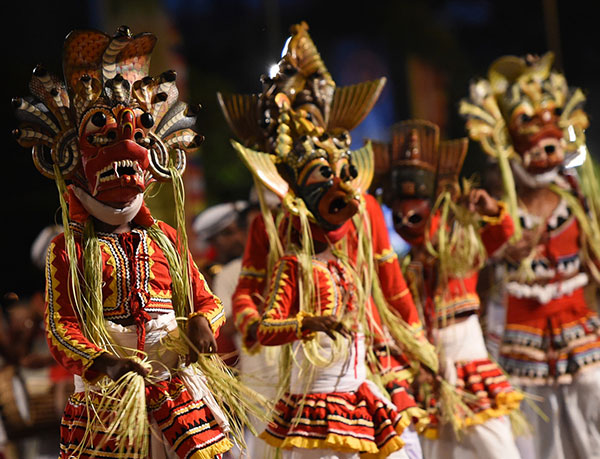 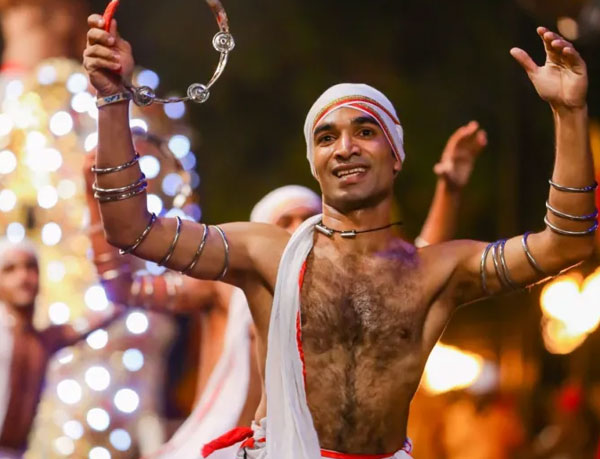 Right after the procession of Diyawadana Nilame comes the Procession of four shrines of guardian gods who are God Natha, God Vishanu, God Kataragama and Godess Pattini. Among these parades first comes the Parade of God Natha. According to Buddhist literature god Natha is one to become next Buddha. The next in line is the parade of God Vishnu who is believed to be the protector of the Buddhism in Sri Lanka. Next comes the Parade of God Kataragama or the Skandha who is believed be god of war. Final Parade is the Goddess Pattini who is believed to cure dieses. After the parade from Pattini Devale, the Kandy Esala Perahera marks its end. It lasts around 4 hours and you’ll forget the feeling of time while immersing in the sight of colorful dancers, incredible music, and majestic elephant parades. 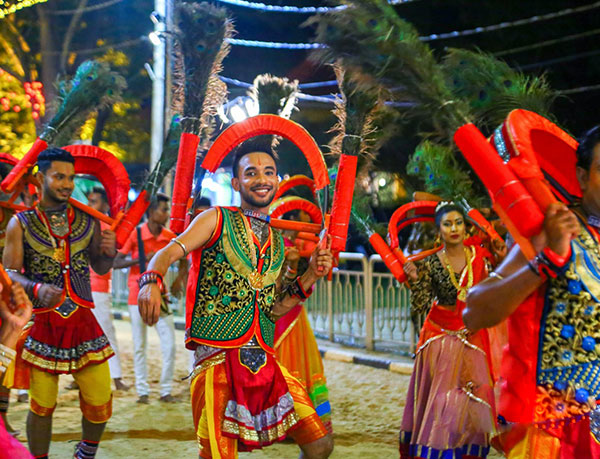 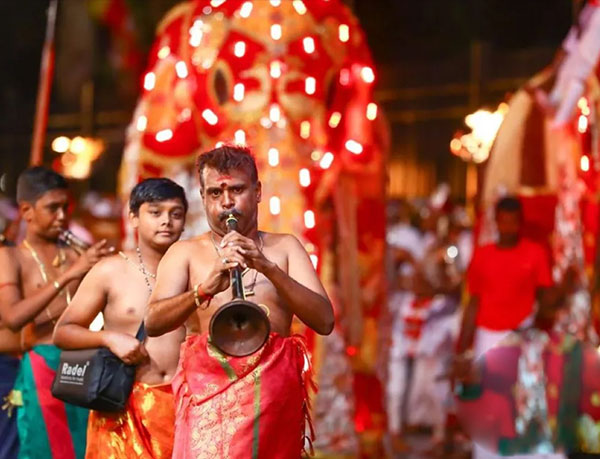 The Day Perahera marks the end of this fascinating and grand festival in Sri Lanka. It starts around 2.00 pm and it can view from D. S. Senanayake Street and King Street. In case you couldn’t attend night Perahera, watching the Day Perahera is the best option. Although it is much shorter in length, really interesting to see it during the daytime. 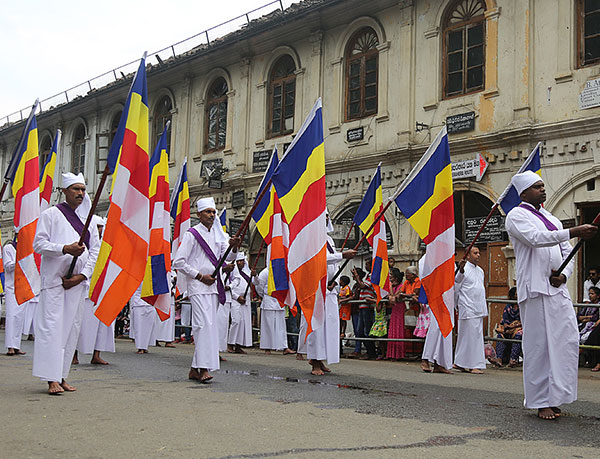 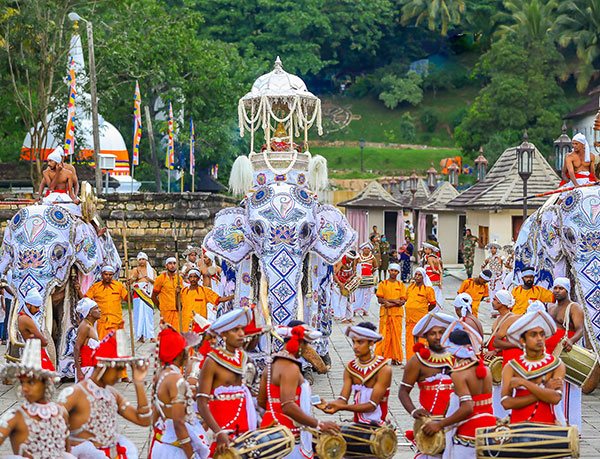